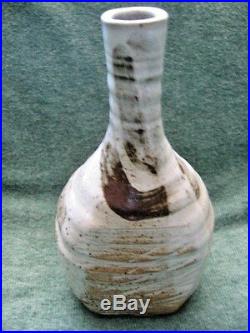 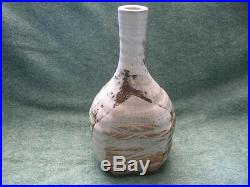 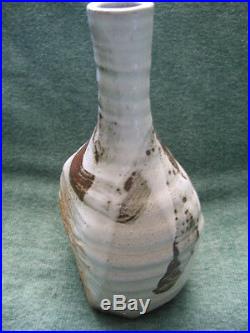 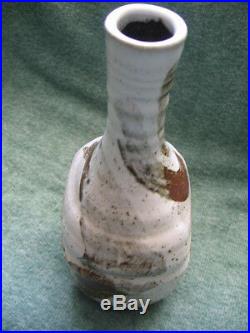 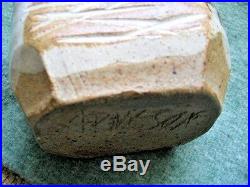 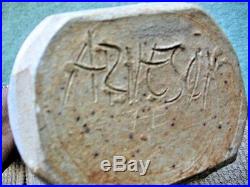 This is a Lovely Stoneware Pottery Vase with Slip glaze by ROBERT ARNESON, a listed California Artist. Robert Arneson was born September 4, 1930 and died November 2, 1992 at the young age of 62. Robert Carston Arneson was an American sculptor and professor of ceramics in the Art department at UC Davis for nearly three decades. Arneson was born in Benicia, California. He graduated from Benicia High School and attended Mills College. Arneson studied art education at the California College of Arts and Crafts in Oakland he taught in a local high school, where he became interested in ceramics. He went on to receive an MFA from Mills College in 1958. Arneson became head of the ceramics department at the University of California at Davis in 1962 and became a full professor of art in 1973. Arneson was influenced by the expressionist work of fellow Californian Peter Voulkos, who had studied Pablo Picasso’s works in clay. It is in excellent pre-owned condition and measures 9 1/2 high. It is signed on bottom in stoneware “ARNESON”. MAKE A REASONABLE OFFER TODAY. PLEASE CONTACT ME IF THERE IS ANY PROBLEM. ALL ITEMS ARE VINTAGE OR ANTIQUE SO DO NOT EXPECT THEM TO BE NEW UNLESS INDICATED. I WILL DO MY BEST TO DESCRIBE ANY MAJOR PROBLEMS. Please provide me with your number if so. The item “ROBERT ARNESON 1930-1992 Art Pottery Vase 9.5 Signed” is in sale since Saturday, April 29, 2017. This item is in the category “Pottery & Glass\Pottery & China\Art Pottery\Studio/ Handcrafted Pottery”. The seller is “liveon2005″ and is located in Hidden Valley Lake, California. This item can be shipped worldwide.