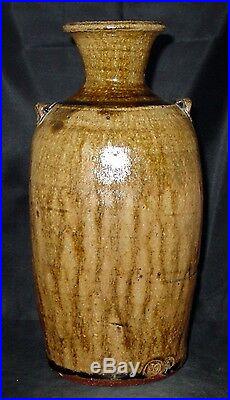 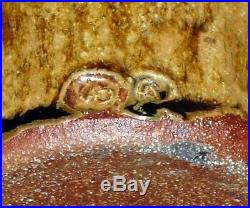 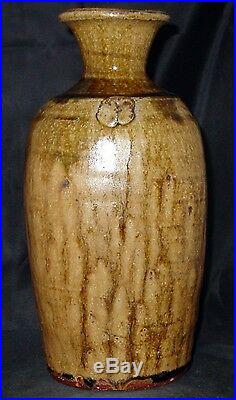 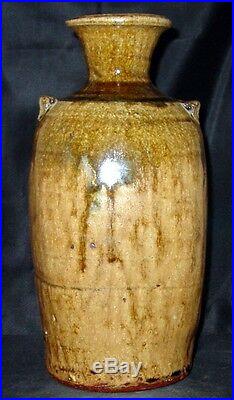 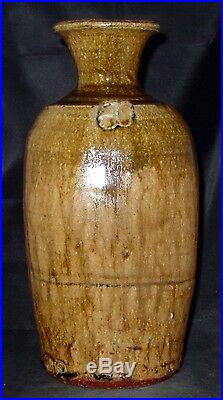 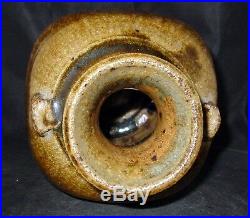 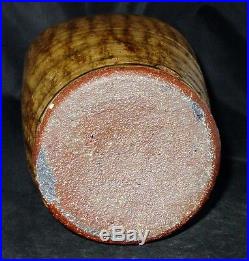 Large Jeff Oestreich Mingei Pottery Vase Warren MacKenzie Bernard Leach Student. OLD – Jeff Oestreich Studio Mingei Pottery Vase. Wood Fired Green Ash – Bernard Leach Student. RARE – Early (1970) Jeff Oestreich pottery wood fired vase. Beautiful Green ash glaze Vase. Lovely 2 little handles. Double stamped old JO and studio Stamp LARGE – Measures: 5 inches wide x 10 1/2 inch High. The base of the vase has some missing clay – done during the firing. This is not seen while on the shelf (see picture). Jeff Oestreich attended Bemidji State University in MN from 1965 to 1969 where he earned a B. He also studied with Warren MacKenzie at the U of M in Minneapolis, before going to England to apprentice at the Bernard Leach Pottery in St. Jeff is a superb craftsman. He has the patience for clean up and detail not often displayed by studio potters. Constantly evolving and developing his forms and glazes, Jeff always brings new work to the table. His most recent work reveals his interest in geometric patterns using precision glaze swaths surfacing his pots. This is just one piece of my large collection. I will be listing multiple pieces of Jeff’s and Warren’s work. I will also be listing work from other students and his contemporaries. The item “Large Jeff Oestreich Mingei Pottery Vase Warren MacKenzie Bernard Leach Student” is in sale since Thursday, April 10, 2014. This item is in the category “Pottery & Glass\Pottery & China\Art Pottery\Studio/ Handcrafted Pottery”. The seller is “northernpottery” and is located in Minneapolis, Minnesota. This item can be shipped worldwide.