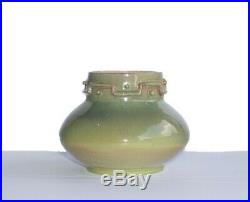 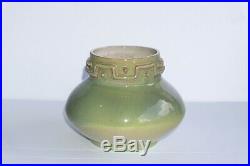 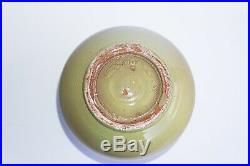 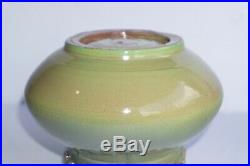 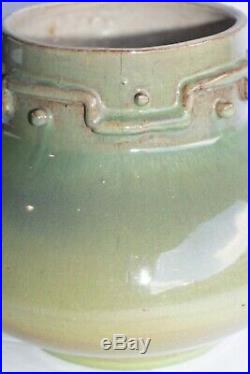 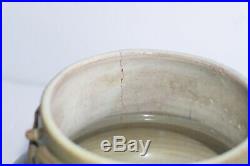 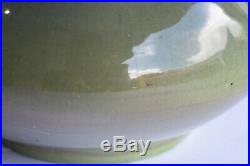 Mostly popular for his landscape paintings depicting urban scenes throughout the 20’s and 30’s also dabbled in Pottery. This vase is a rare find. The glaze is made up of beautiful deep and vibrant greens with a “Greek Key” border to the rim. The bottom is signed “Lawrence Blazey”. Lawrence Edwin Blazey (19021999) was an American artist and teacher, listed in “Who’s Who in American Art”. Blazey attended the Cleveland School of Art, now the Cleveland Institute of Art. Graduating from the Cleveland School of Art in 1924, he had further studies at the American Designers Institute, Cranbrook Academy of Art, and the Slade School of Art in London. Blazey was most well known for his paintings of urban areas during the 1920s through the 30’s – several of which are displayed at the Cleveland Museum of Art. He also has pieces at the Butler Museum of Art and in the Cleveland Municipal Collection. He was a painter and advertising illustrator, and also worked with ceramic, gouache, pencil, and enamel. Dimensions : 6″H x 6.5″W rim diameter: 3.75. Condition : A hairline crack is visible to the inside of the rim. Please view all high definition photos using the zoom feature to inspect all details. Send me your offer for a quick response! The item “Lawrence Blazey Cleveland School Rare Studio Pottery Vase signed” is in sale since Wednesday, April 15, 2020. This item is in the category “Pottery & Glass\Pottery & China\Art Pottery\Studio/ Handcrafted Pottery”. The seller is “period-salvage-antiques” and is located in Stockton, New Jersey. This item can be shipped worldwide.