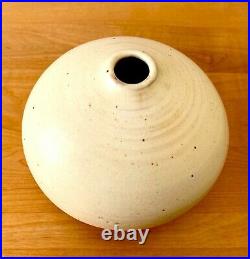 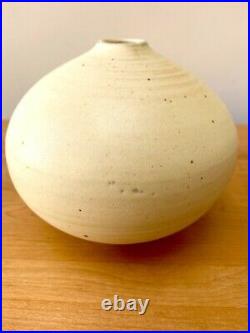 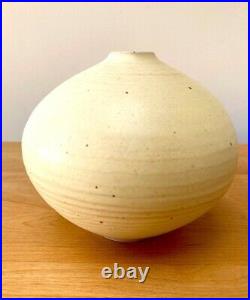 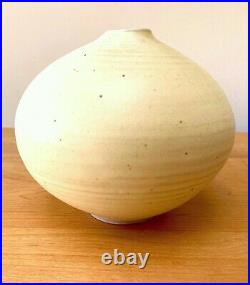 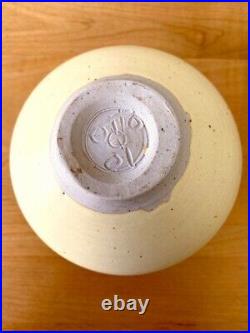 Imperial Chinese yellow vase by Otto Heino. Height 5″ (12.5 cm), Width 5 3/4″ (14.5 cm). Handmarked Otto with date 01 (=2001). This is the real dealOttos famous yellow glaze which isnt to be confused with his similar oatmeal glaze that only an educated eye can distinguish. This classic top-heavy ovoid Asian shape akin to a Chinese lantern is called a birds egg bottle. The story of Ottos rediscovery of the lost high-fire yellow glaze of imperial China is well documented as you can read here and elsewhere. What makes Ottos high-fire subtle yellow glaze notable is that its based on iron rather than cadmium or another transition metal, just like the ancient vessels produced for the emperors of China which likewise resemble the color of sunshine and divine power. Otto and his wife Vivika had worked together on rediscovering this lost glaze formula, but it was only after Vivikas death that Otto hit upon the secret combination of chemicals that yielded this unique high-fire glaze. He guarded the secret so carefully that upon arrival, Otto would immediately burn the bags of a certain chemical component that he foreswore his suppliers never to divulge. OTTO & VIVIKA HEINO. Otto and Vivika Heino were an internationally famous artist couple among studio ceramicists. They worked together as a team until Vivika’s death in 1996 and are known for their modernist forms, expertly thrown, as a vehicle for their outstanding glazes which they developed through years of experimentation and study. Their vessels are included in permanent collections of every major ceramics museum and are coveted by collectors around the world. The item “Imperial Chinese yellow vase by Otto Heino” is in sale since Sunday, September 27, 2020. This item is in the category “Pottery & Glass\Pottery & China\Art Pottery\Studio/ Handcrafted Pottery”. The seller is “worldsave” and is located in San Francisco, California. This item can be shipped to United States, all countries in Europe, all countries in continental Asia, Canada, Australia.