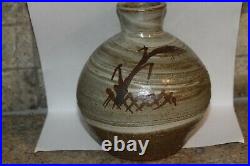 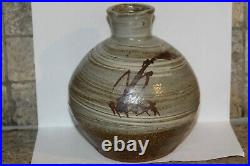 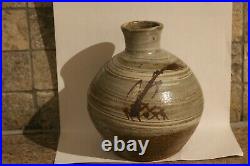 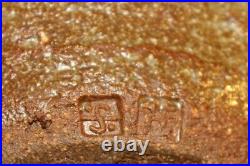 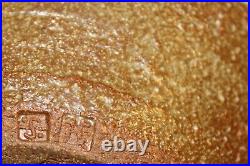 Large Shigeyoshi Ichino iron oxide on hakame studio pottery onion vase. Condition is new “Used”. This unusual but beautiful onion vase comes from Shigeyoshi Ichino whilst he was a resident potter at the leach pottery in st ives. The pot is in PERFECT condition standing an impresive 150mm high and wide. The brushed hakame glaze is a ground for the delicate beautiful iron oxide painting of the wheat sheaf. The pot is perfectly thrown and true in a heavily grogged stoneware. The pot has the St Ives stamp and the personal stamp if Ichino. Shigeyoshi Ichino, from the Tamba region of Japan, worked at the Leach Pottery from 1969-73: Bernard and Janet Leach were introduced to Shigeyoshi. S father, Tanso, by Shoji Hamada in the early 1950s. Janet Leach then went on to study under Tanso for two years. Shigeyoshi died in 2011 and the works for sale were made in Japan. The item “Leach pottery Shigeyoshi Ichino iron oxide on hakame studio large onion vase” is in sale since Sunday, January 10, 2021. This item is in the category “Pottery, Porcelain & Glass\Pottery\Studio”. The seller is “gladbill” and is located in Rochdale. This item can be shipped to United Kingdom.