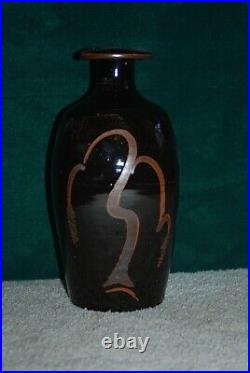 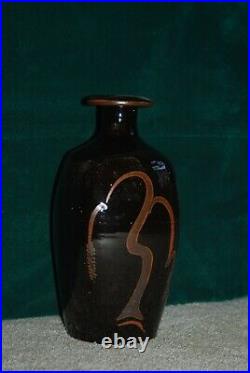 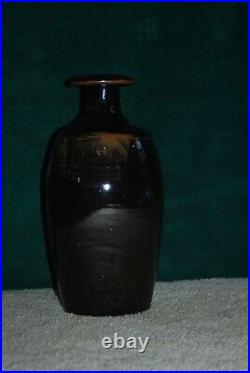 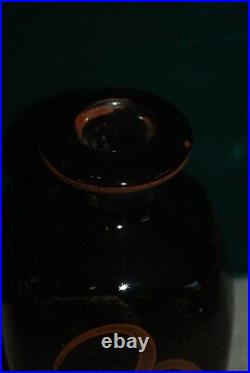 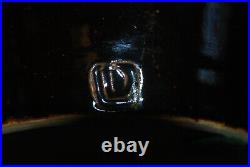 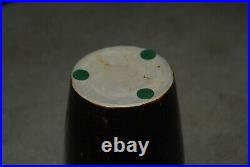 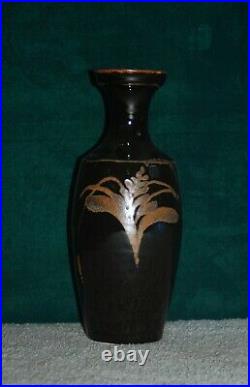 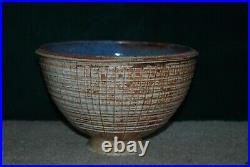 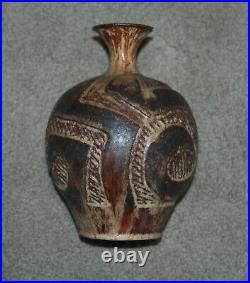 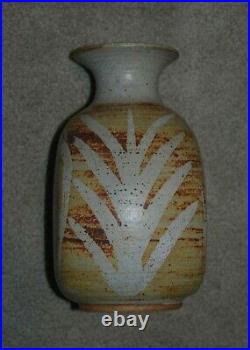 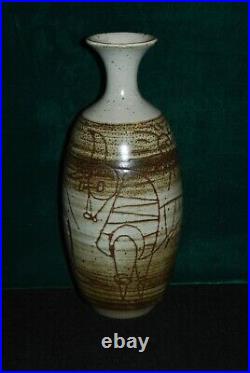 This listing is for a VERY large MUSEUM LEVEL vase by DAVID LEACH (1911 -2005) who was the first son of BERNARD LEACH (1887 – 1979). It is very large at 13 inches tall (33 cm) by 6 1/2 inches in diameter. This is a quite substantial piece at 10 1/2 pounds. It was thrown on a wheel and then paddled into flattish sides that are still somewhat convex. It is made with porcelain clay with a rich black / brown overall temmoku glaze. The primary design motif is one of Mr. Leach’s often used Willow Tree motifs in a striking gold color achieved using a wax resist technique with iron oxide. The Willow Tree is incredibly simple and graceful with sweeping drooping limbs with a hint of foliage at the limb tips. The temmoku glaze breaks beautifully on the mushroom cap shaped rim and also the shoulder edge to reveal striking highlights of gold. This is the nicest David Leach piece I have encountered. It is in perfect condition with no chips, cracks or restorations. It is signed with his DL cypher. This indicates that he threw the vase as well as glazed it instead of having an apprentice involved. This piece was produced at the Lowerdown Pottery at Bovey Tracey, Devon, England. David leach is represented in many museums around the world including The Victoria and Albert Museum in London. Photos #9 through 12 are bowls and vases by David Leach, Marguerite Wildenhain, David Stewart and F. Carlton Ball that I also have listed. The item “DAVID LEACH WILLOW TREE VASE OF MUSEUM QUALITY MAGNIFICENT LARGE MAJOR PIECE” is in sale since Friday, September 25, 2020. This item is in the category “Pottery & Glass\Pottery & China\Art Pottery\Studio/ Handcrafted Pottery”. The seller is “tryyn619″ and is located in Descanso, California. This item can be shipped worldwide.