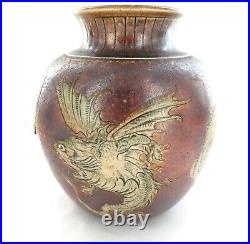 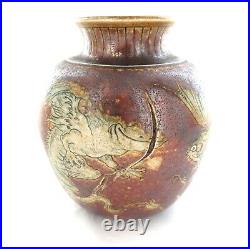 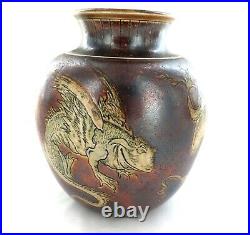 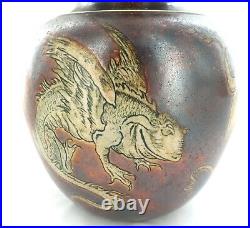 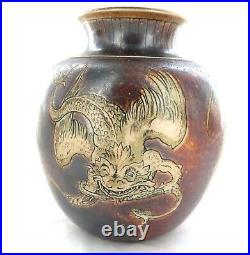 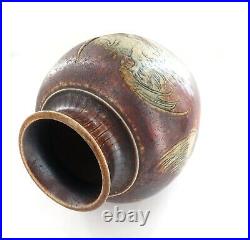 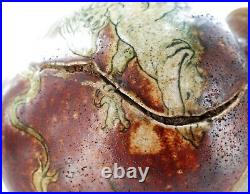 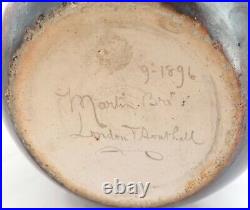 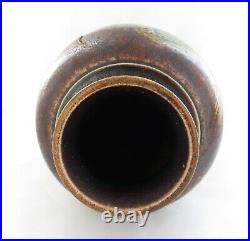 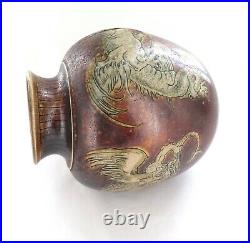 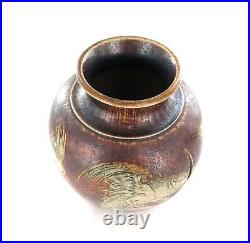 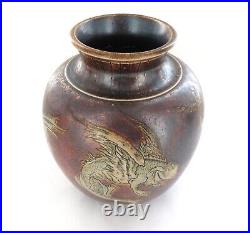 Rare Mis-fire Martin Brothers Stoneware Bulbous Shape Vase Mythical Beasts 1896. Harrington & Co are pleased to present the following pieces of genuine Martinware from a privately owned collection we have recently acquired. This could be your opportunity to own a prized piece of artistic, studio pottery from the infamous Martin brothers. This particular piece from the collection, is a stunning deep burnished bronze pot featuring mythical creatures with grinning happy faces. The creatures are a cross between dragons and fish with fantastical wings, animated expressions and long forked tails. One of the beasts has a snake in his claws and seems very happy about it. The grotesque style, mischievous faces with sly grinning mouths are classic Martin Brothers, at their playful best. The glaze is rich bronze toned with light greenish grey hues for the mythical beasts with black outlines. The condition of the pot is amazing, it is very well preserved and the glaze is as it was when it was fired, including the slit in the side. This pot would have perfect but for this tear that would have happened in the kiln, as a mis-fire. The rear of the pot has been incised with Martin Bros, London & Southall and the date 9 – 1896. The Martin Brothers manufactured pottery in London between 1873 and the early 20th century during a time of great change. The brothers moved away from the highly decorative Victorian ceramics to a more figural, timeless, experimental style. The four brothers, Robert, Charles, Walter and Edwin Martin were pioneers in art pottery, in modern terms however, Martinware is considered to be more studio pottery. The pottery production was very much a family affair with all the brothers playing their part. Although mainly self taught, Robert studied under J. B Philips, an architectural sculptor and Alexander Munro in 1861 who introduced him to some very influential writers, philosophers and artists of the time. He later took drawing classes at the Lambeth School of Art, where his two brothers, Walter and Edwin also later studied. Charles Martin mainly managed the shop, though often found it difficult to sell the pottery and was just as delightfully eccentric as his brothers. The Martin brothers produced a very distinct type of salt glazed stoneware until the closure of their studio in 1914. The eldest brother Robert Wallace Martin, continued to produce some pieces of pottery until his death in 1923. Martin Brothers stoneware included both vessels and sculptural figures. Exhibitions and catalogues of works show the true extent and range of their experimentation, whilst their more famous pieces showcase, the brothers at their most esoteric and loveable. Although they were arguably best known for their bird sculptures, vessels adorned with creatures and caricatured, grotesque faces; their work also included nature inspired glazes, Japanese influence and art nouveau inspired work. These bird sculptures have become very covetable and are known as the’Wally Birds’ In the usual Martin brothers style these birds had exaggerated talons, beaks and fierce yet comical eyes. The pottery characters and mugs, jars, vases and spoon warmers the brothers created were primarily moulded out of salt glazed stoneware clay. This material had previously been used for sewer pipes in the greater London area. The three brothers produced experimental art with the clay. Their technique required the pottery to be fired at a high temperatures and salt was thrown into the kiln to create a ceramic glaze. Once the salt fused with the clay at high temperatures the glaze was a glossy or matt surface finish. The results were unexpected and unknown and very much dependable on the kiln temperature on the day. Salt glaze brings out wonderful hints of grey with beautiful greens, blues and softer browns. These colours are very representational of Martinware pottery. As the kilns were only able to be fired up occasionally and pots were often coming into direct contact with the flames, the results were very unpredictable. Sometimes only two or three items would survive the firing process. This undoubtedly caused much anguish for the brothers but helped to create the uniqueness of their work. There was a renewed interest in Martinware after Richard Dennis an art dealer in London, organised an exhibition at Sotheby’s Belgravia in 1978. That particular bird jar was created in 1889, it was thought to represent Benjamin Disraeli in caricature. Dimensions are as follows. Height 19.5 cm x width 15 cm x thickness 6.8 mm. This item is in the category “Pottery & Glass\Decorative Pottery & Glassware\Vases”. The seller is “hnco” and is located in this country: AU. This item can be shipped worldwide.